Our Easter Tennis Camps once again proved to be a huge success this year. A total of 71 different children had a great time improving their tennis during the course of the 2 weeks. We were once again extremely lucky to have dry weather for 2 weeks, despite the strong winds and threats of rain in the first week, the second week made up for it as the children enjoyed playing tennis in glorious sunshine throughout the week. 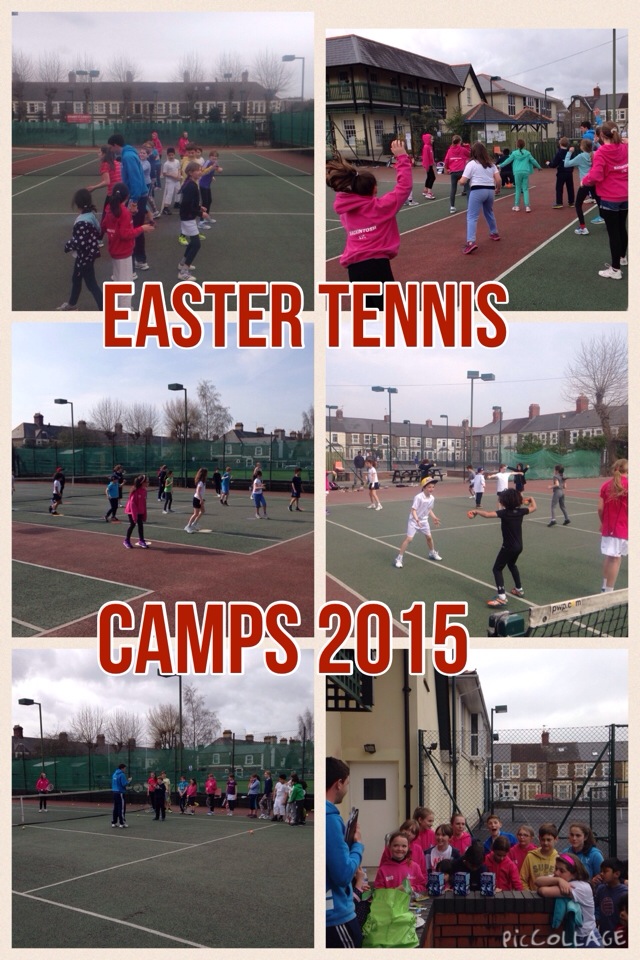 There will be more tennis camps taking place during May half term and Summer Holidays – bookings are now being taken for both. Please contact Head Coach Rhys Morgan to book your place.

Ben Voss had an extremely busy schedule playing in a total of 4 competitions. Ben started off in the Grade 4 Cardiff Met Easter Open losing narrowly to Harri Lloyd-Evans 5-4(5) 1-4 0-1(5) (who he had never previously won a set off). Ben then went on to beat Rory Jones and Rohit Krishnan to win the consolation draw. Ben then played in the Grade 5 Connected Clubs Easter Open in Glyneath, after comfortably beating Samuel Lynn in the first round Ben came up against top seed Jack Ryan playing amazingly to win 5-3 4-2. In the final, Ben came up against James Symons-Hicks winning 4-1 4-1 to win the title. Ben followed this up playing in the Grade 5 14&U Black Dog competition in Whitchurch again reaching the final with wins over Cai Morton-Smith and Gregory Colwell-Hector, before losing out to Jack Ryan 2-4 1-4. To finish off a busy Easter Ben played in the Grade 4 Penarth Windsor Open. In an extremely high quality field Ben had a good win in the 1st round against Jack Rees 5-3 4-2, however Ben came up against top seed Alex Hamer in the Quarter-Finals. Despite the loss Ben was delighted with his achievements during the Easter break and as a result has moved up to a 7.1 rating – Congratulations Ben 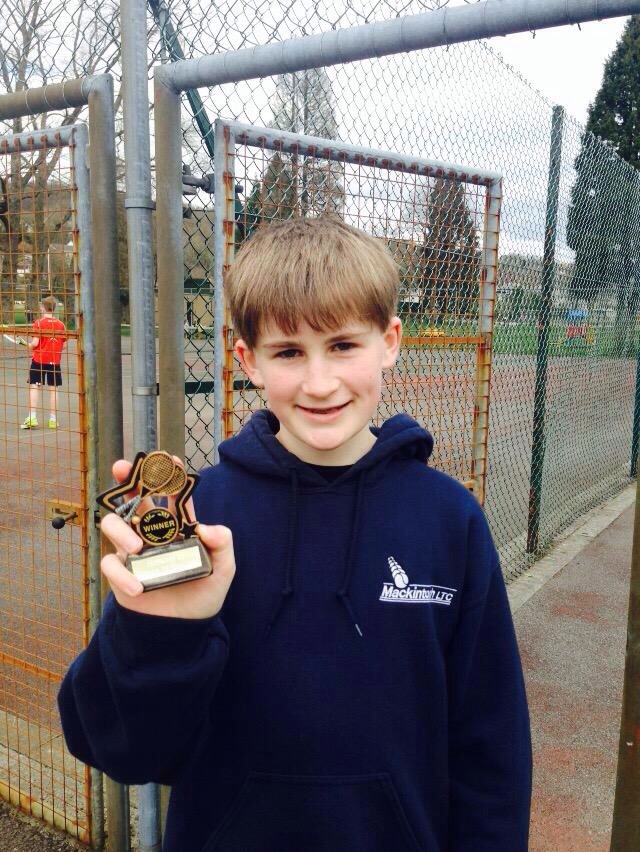 Ali Alkamil and Ieuan Burridge-Bryant also played in the 16&U singles at the Penarth Windsor Open. Ali played really well to beat Ewan Andrews 4-1 4-0 before a fantastic win against top seed Odran Hobbs in the Quarter-Finals (4-2 4-1). In the Semi-Finals Ali played Henry Muxworthy in an extremely close match Ali lost out 10-8 in the third set tie-break. Ieuan got off to a slow start losing his first round against Harley Stephens 1-4 1-4, however began to play much better in the consolation draw beating Thomas Butler-Sainsbury 4-5 4-1 1-0(3) before losing a close match to Amman Huffer in the final of the consolation draw 5-4 4-1 – well done Ali and Ieuan, keep training hard and I’m sure you can both go a step further next time.

Finally, a huge well done to Jasmine Burridge-Bryant who played in her first Grade 4 competition in the Penarth Windsor Open. Jas played a fantastic first match and was so unlucky to lose 10-8 in the third set tie-break in a match that could have gone either way – fantastic effort Jas, great to gain more experience at playing matches.

We have a busy Summer of matches for our junior teams, with the season kicking off this weekend with our 16&U boys team playing away v Crickhowell. Good luck to all players representing our teams this Summer.

Watch this space for results and updates from matches throughout the season.

This Sunday 29th March, the tennis club are running a Family Open Day from 10am-4pm. All families are welcome to come along and get involved with a range of on-court tennis activities for players of all ages and abilities.

From 10am-12pm, head coach Rhys Morgan and other members of the coaching team will be running a range of taster sessions including Mini Tennis, Cardio Tennis and Adults Coaching. From 1-4pm there will be an Adults Easter Doubles competition for all adults and stronger junior players at the club – the competition is open to all adults, with members encouraged to invite a non-member to pair up with for the competition.

Refreshments will be available throughout the day from the clubhouse.

If you have any questions, please contact Rhys Morgan at tenniscoach@mackintoshsportsclub.org or on 07929264165.

We will be holding a quiz night on Saturday 7th March starting at 7:30pm. Anyone can come along for the evening, with teams of up to 6 people. The quiz will cost £1 per person and there will be prizes for the winning team.

No need to get a babysitter for the evening – following the success of Emma’s childcare service during the last quiz night, she has kindly offered her services once again. Childcare will cost £5 per child and will include soft drinks, popcorn and a movie in a safe and child friendly environment. There will be limited childcare places available, please contact Emma to book your child’s place – 07970 820307.

There was a busy schedule of half term tennis activities with coaches Rhys, Emma and Billy running tennis camps for 53 different children of all ages and abilities. The children enjoyed taking part in a range of fun games and activities whilst learning and improving their tennis. 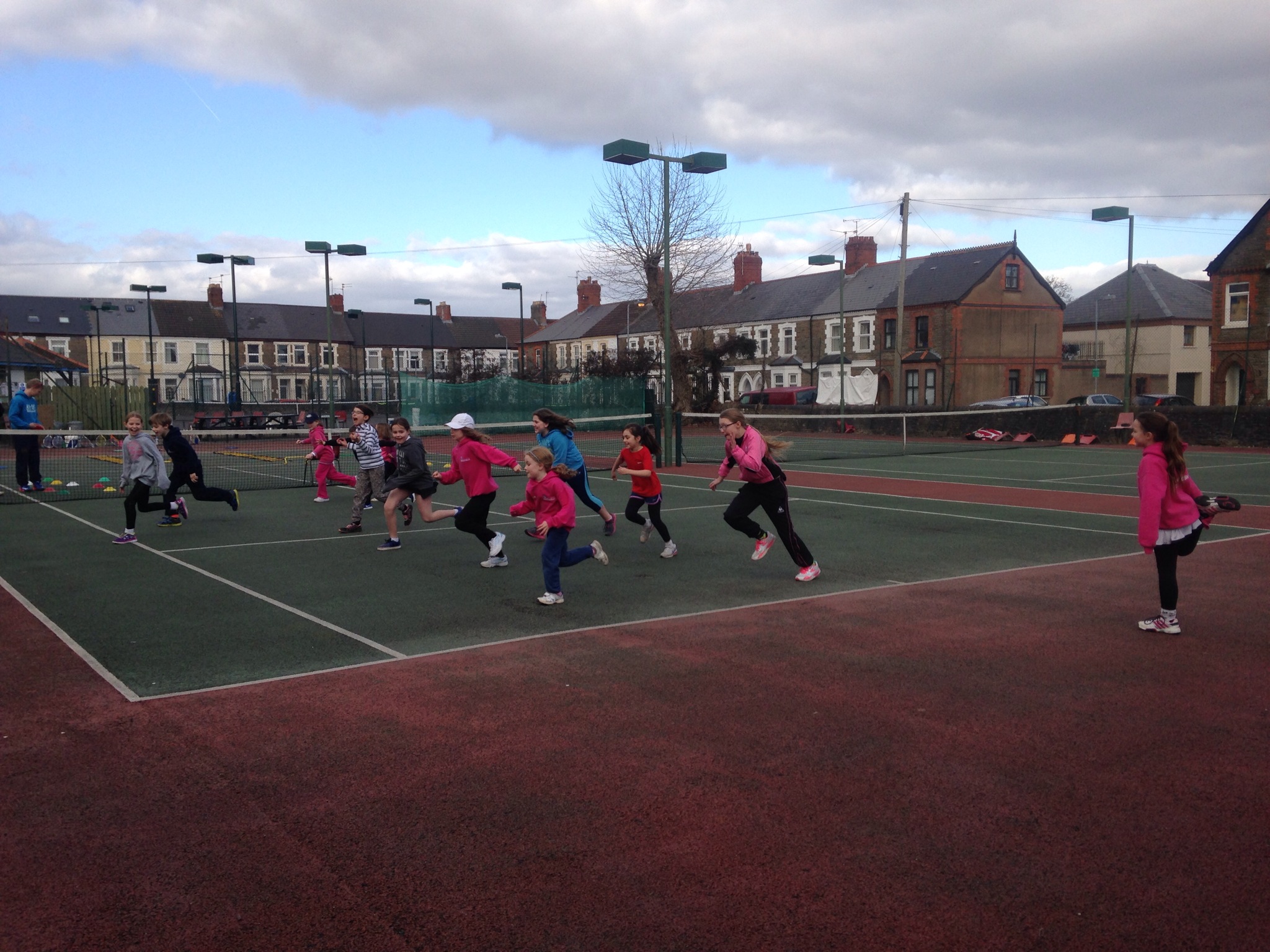 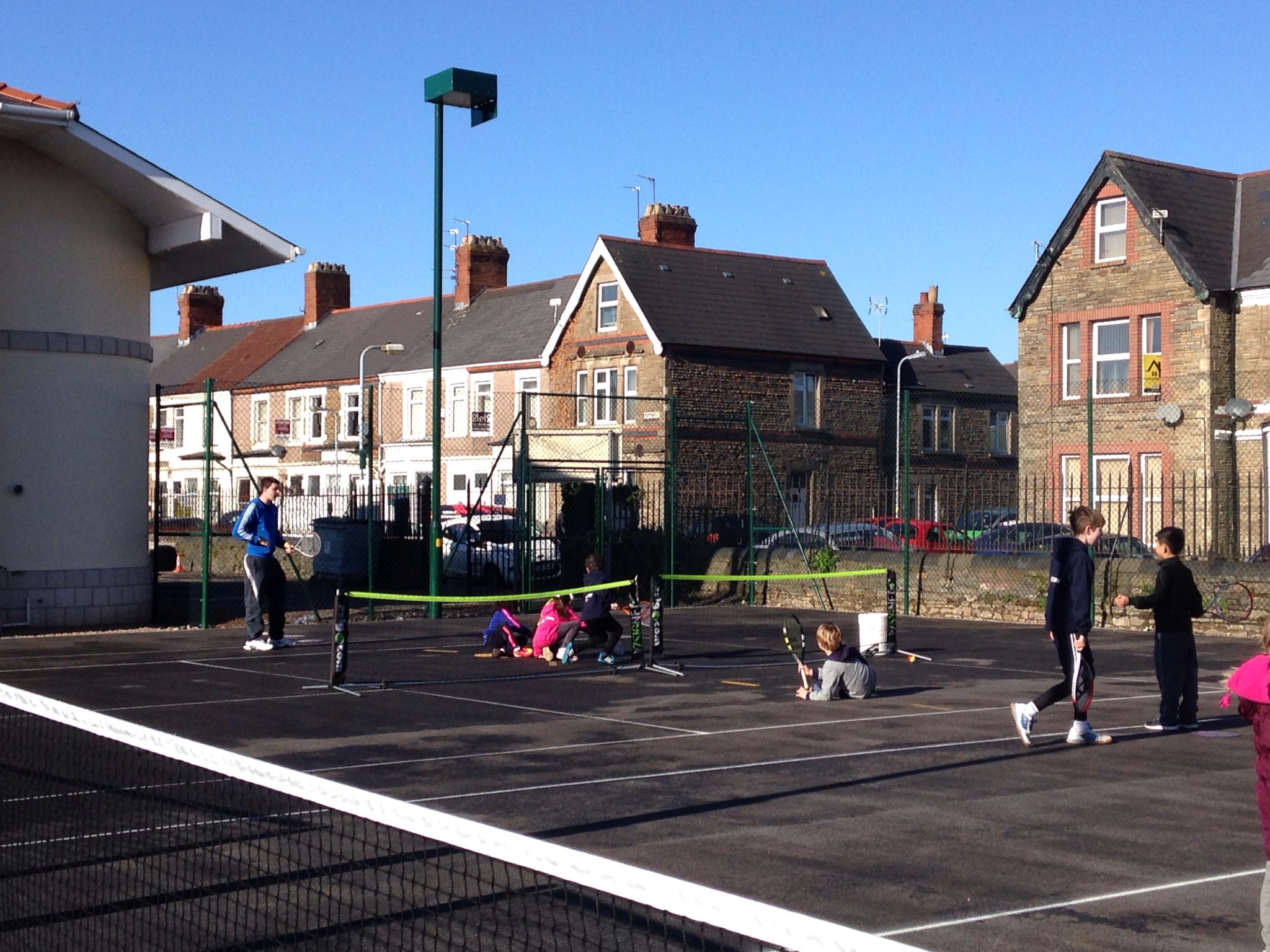 Our Shrove Tuesday frying pan tennis competition turned out to be a big success with 12 players taking part.

All players had loads of fun, and there were some unbelievable points played considering players were using frying pans.

The final was contested by Alex and Tom with both players proving they were worthy finalists with an amazing display of powerful baseline rallies and net play skills. In a close match Alex eventually came out on top winning 10-8 to become the 2015 Mackintosh Frying Pan Tennis champion.

Following the tennis all players enjoyed some delicious pancakes in the clubhouse to round off a great evening. 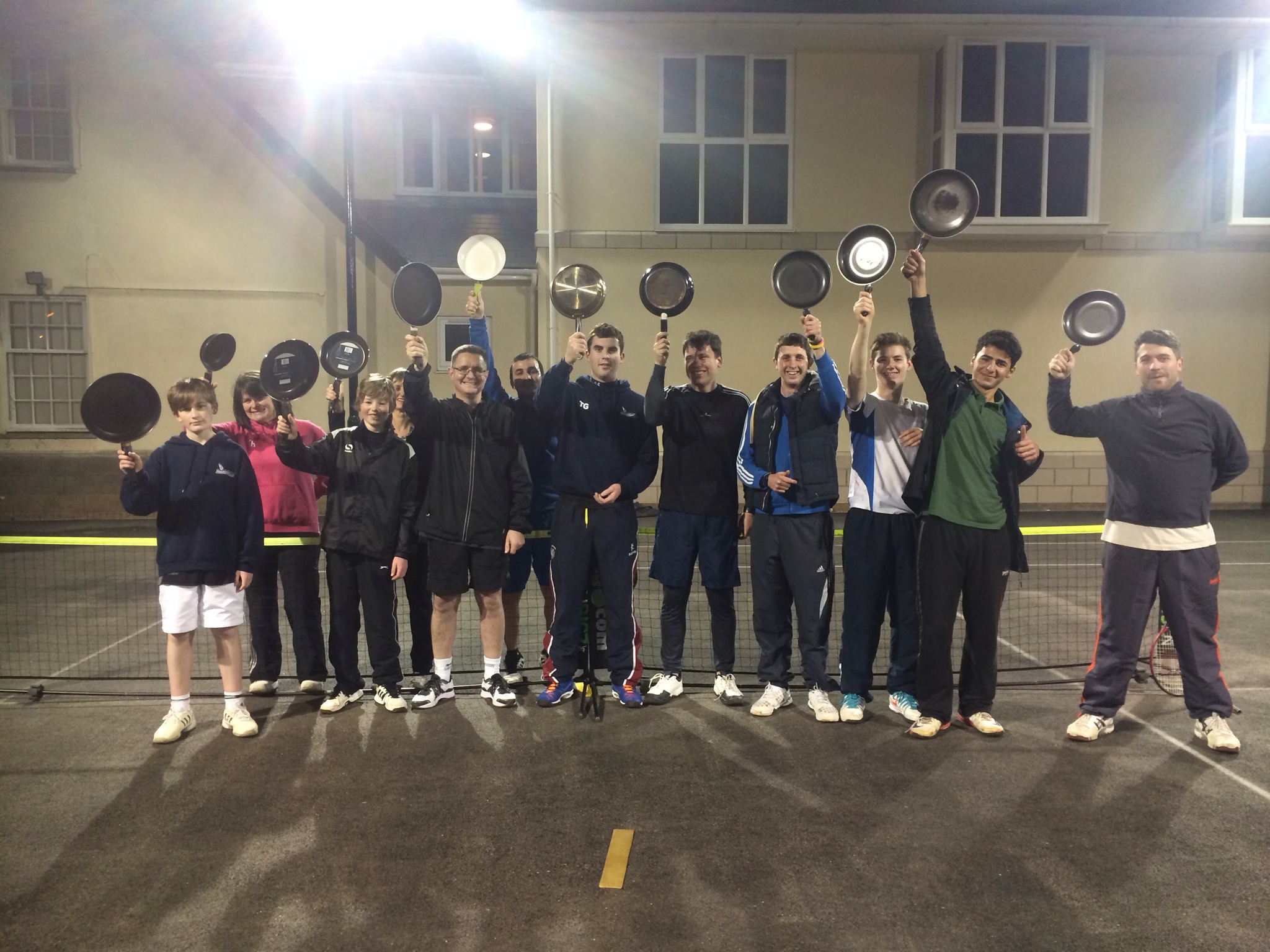 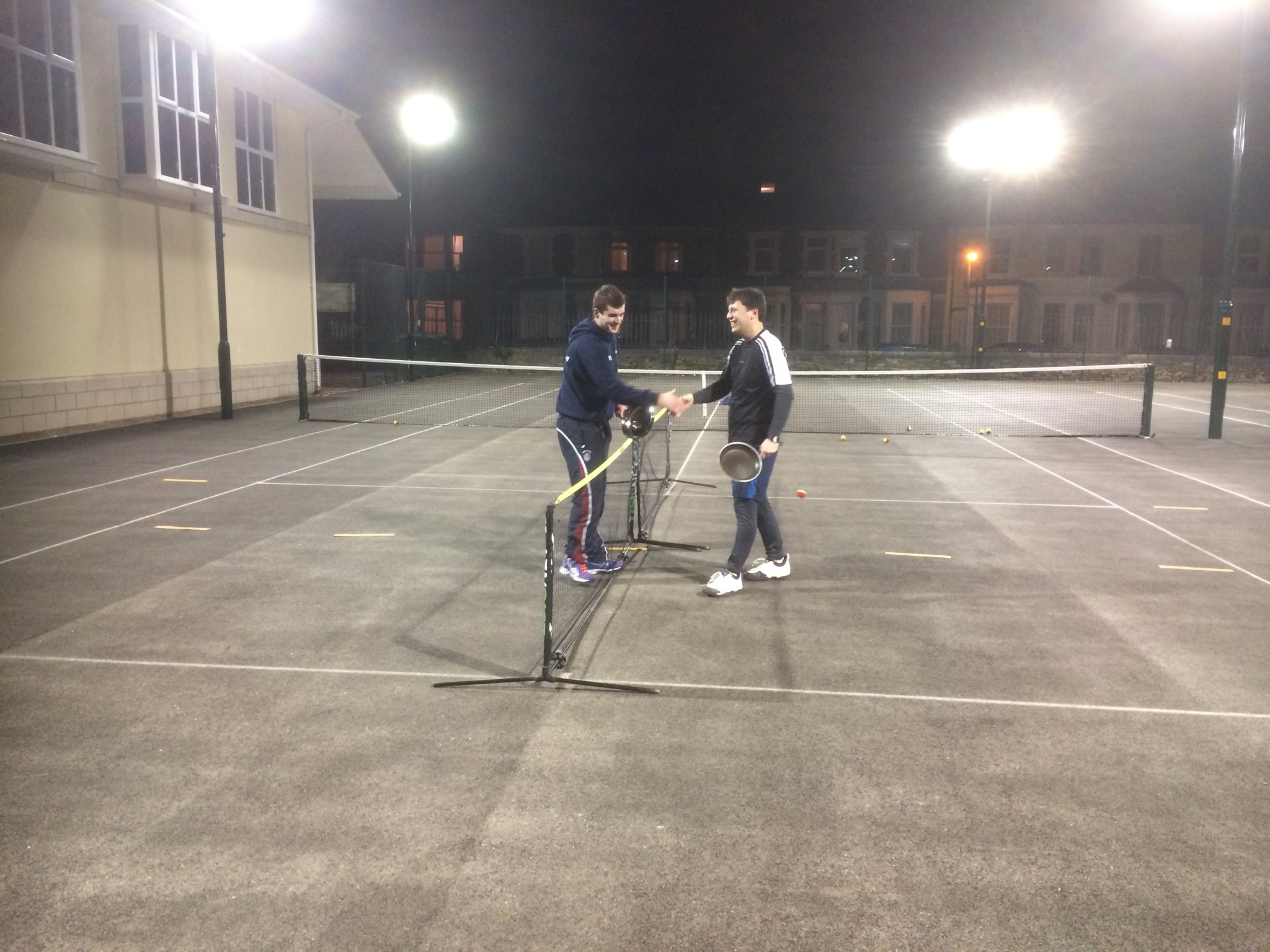 With this Tuesday 17th February falling on Shrove Tuesday, we have decided to run Social Tennis with a difference for this week.

Commencing at 7pm we will be running a Frying Pan Mini Tennis competition. Normal tennis rules will apply, however entrants will be required to play with a frying pan instead of a racket. Members are encouraged to bring along their own frying pans to play with. The event is open to all adults and stronger juniors. Entries will cost £2 per person and will include a pancake in the clubhouse after the competition finishes.

Come along to the club on Friday evening to enjoy the opening night of the Six Nations 2015.

The game will be shown live in the clubhouse on a big screen. With offers on drinks and refreshments available throughout the evening.

Our Christmas Party took place on Saturday 20th December with lots of families coming along to support the event. 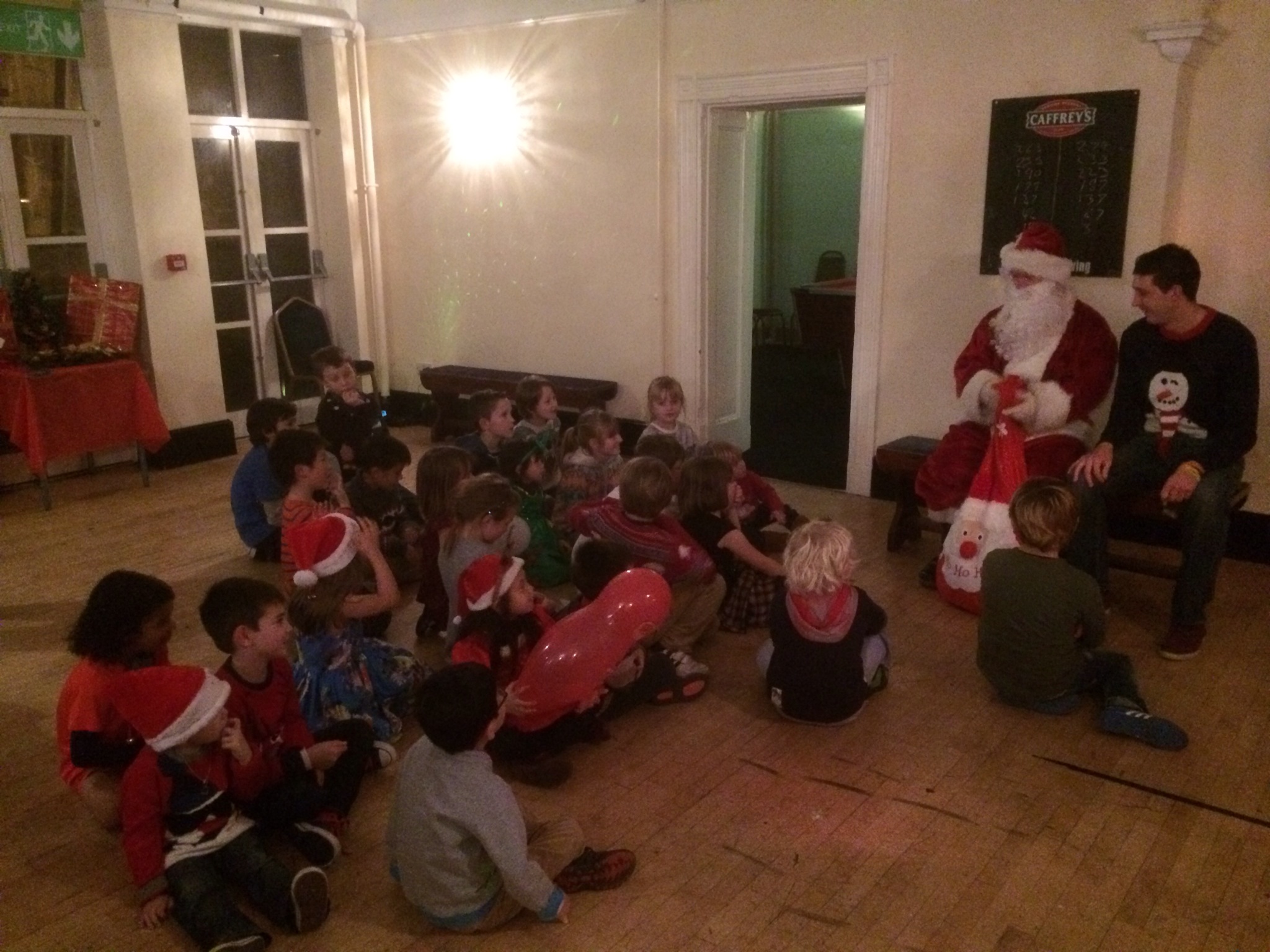 A big thanks to everyone who came along to our Halloween Party on Saturday 1st November. Everyone looked fantastic in their scary costumes.

It looked like all of the children had lots of fun taking part in the party games.

A big thanks to Emma for organising the party. 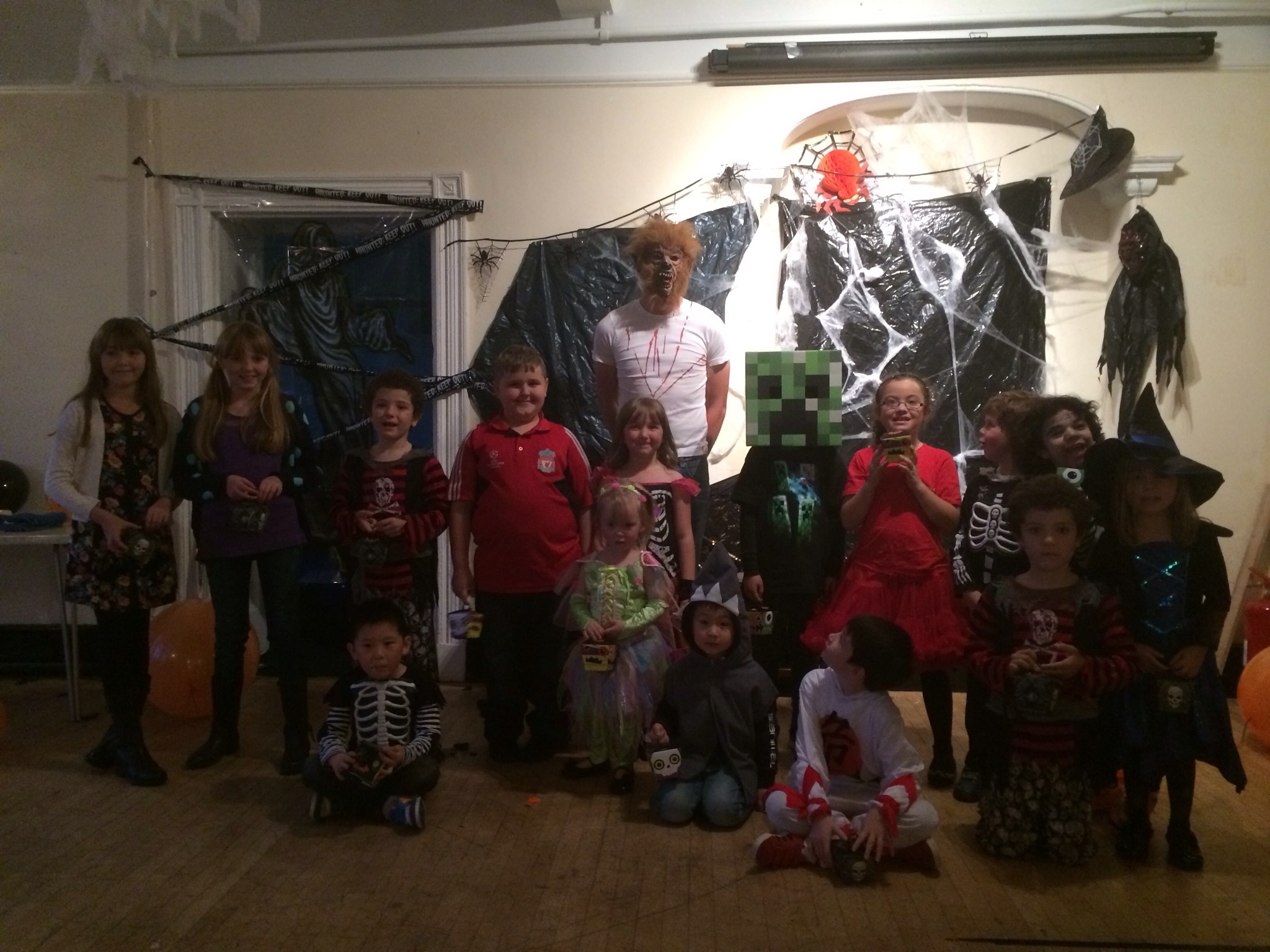